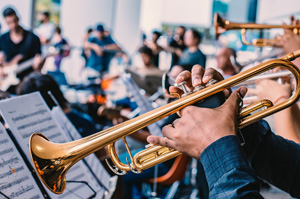 It didn’t take long, given the science’s relatively short history, for musicians to wonder what cryogenics could do for them. After all, for a serious musician, improving the sound of your trumpet, saxophone, flute, or horn an intriguing proposition. Finally, after years of speculation, dedicated players who decided to see what effect the deep cryogenic treatment of a trumpet would have.

Jason Blough of the Trumpet Players’ International Network (TPIN) wanted to find out for himself whether the deep cryogenic treatment of a trumpet actually made a measurable difference in the instrument’s sound or quality. To test this, Jason received four loaned trumpets from members of TPIN and enlisted the help of a professional instrument repairer and cryogenic processor, as well as four professional-level trumpet players. A physicist was also recruited for spectral analysis of the instruments, the results of which showed some interesting information and are linked on the study’s page.

Each trumpet would be professionally cleaned, then played. The professional player would then grade the performance of the horns using their years of experience to judge of the instrument’s qualities. After which, three of the four horns would be treated then returned, along with the fourth untreated “control” horn which was not identified to the players, for another round of play-testing. This would give a fairly good idea of whether improving the sound of your trumpet was indeed possible with cryogenics.

The following were the players took part in this experiment:

John Hagstrom: Hagstrom has also worked extensively with Yamaha to create several professional trumpet designs in its Chicago Artist Model Series that include top selling Bb and C trumpets. John Hagstrom joined the Chicago Symphony Orchestra as a member of its famous trumpet section in 1996. He is also in constant demand as both a trumpet teacher and trumpet soloist around the world

Results were measured under the following metrics.


The basic guidelines given to the testers for the scale were these:

The six characteristics they were asked to rate are as follows:

Once the scores were tallied, the results were clear. Evidence pointed to the fact that deep cryogenic treatment of a trumpet had a net positive effect on all three treated trumpets. Reported grades improved significantly over the control horn, with the heaviest (hence containing the most metal) trumpet showing an improvement in grading of almost 33%.

Two of the horns scored higher in every category after testing, and all but one professional player could identify the untreated “control” horn simply by indicating the lack of improvement. With a significant improvement of sound, the treated trumpets had passed the most important test. 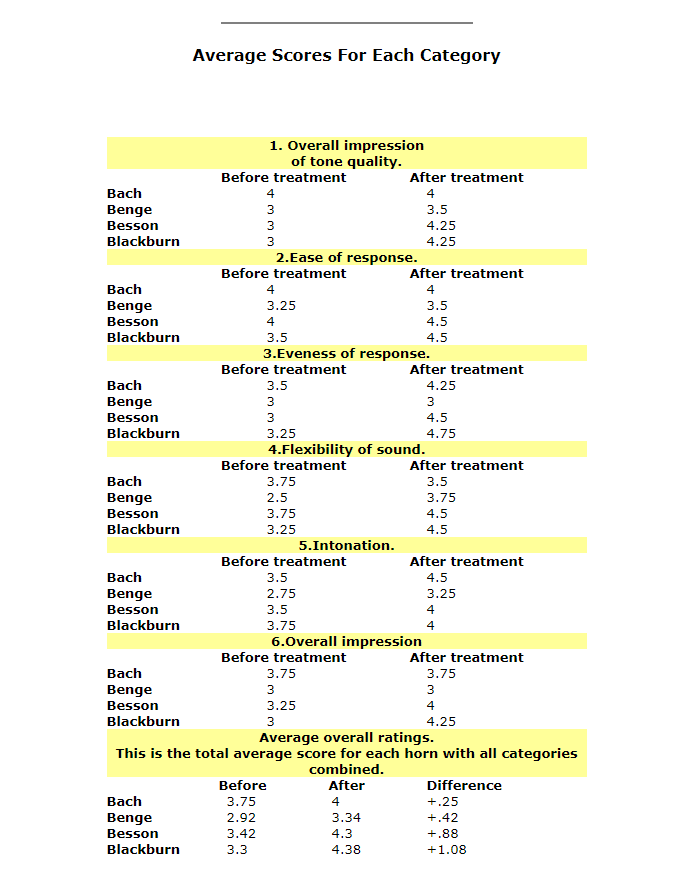 When your livelihood depends on your music, you need every professional advantage you can get. Beyond that, when music is your passion, you will do whatever it takes to chase that perfect tone. It is clear that if you play a metal instrument, cryogenic treatment can give your instrument the crisp, clear sounds you’ve been missing.

Don’t trust your instrument to just anybody. Improper deep cryogenic treatment of musical instruments or any instrument can do far more harm than good. We’re proud of the work we’ve done with professional musicians, orchestras, and audiophiles everywhere to give them instruments with superior sound quality — measurable results that you can hear.

Contact our cryogenic specialists today to find out how deep cryogenic treatments can improve the sound of your trumpet or other metal instrument today.

Published with permission of Jason Blough.  Thank you Jason!

Please feel free to reach out to us through our contact page.