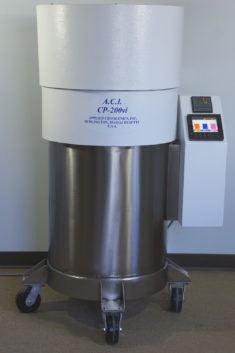 I’ve had discussions with customers whose experience extends back to WWII clays. I’ve learned from their oral history that a crude form of cryogenic processing had its origins at the Watertown Arsenal (Watertown, MA) during the war years.Under the guidance of Clarence Zener, who would go on to develop the Zener diode among other advances in solid-state physics. The method was straightforward; steel cutting tools were immersed in liquid nitrogen for a brief period of time, removed from the liquid, allowed to warm up and placed into service in the arsenal’s production lines. Occasionally tools would crack or chip as a result of the thermal shock associated with the rapid rate of cooling. Some tools might become brittle because of the newly formed and untempered martensite and chip in service. Of the tools that survived this crude quenching, many exhibited dramatically enhanced service life.

During the 1960’s, a few purveyors of cryogenic processing services started using multistage mechanical refrigerators in conjunction with insulated “cold boxes” to slowly cool tools to cryogenic temperatures. Rather than resorting to solid (tool) to liquid (liquid nitrogen) heat transfer they utilized gas kinetics to remove the latent heat from the tooling, a far gentler process. Not only did this avoid the problem of cracking during the cool-down, but also it yielded better wear resistance enhancement. This dependence of wear resistance upon cooling rate would later be quantified by Randall Barron (I). Post refrigeration tempering was also employed to toughen the fresh martensite to further improve the process.

With the growing acceptance of cryogenic processing today, several manufacturers now offer liquid nitrogen based processing equipment that attempts to mimic the slow cooling rates of mechanical refrigerators. Some are successful in this endeavor. Surprisingly, some still are proponents of the solid-to-liquid rapid cool down.

A crucial element of any system that purports to ensure freedom from thermal shock is a liquid-to-gas heat exchanger used in conjunction with a circulator fan. The heat exchanger contains the boiling liquid nitrogen (LN2 ) and absorbs the thermal shock while the fan circulates gaseous nitrogen over the heat exchanger (HE). and the payload to slowly remove the latent heat of the payload. Add a programmable controller  and LN2 flow controlling solenoid valve, and a thermocouple to monitor gas temperature and you have a servo system that permits the execution of predetermined time-temperature profiles. Introduce electric resistance heating elements in front of the circulator fan, upgrade to a dual output controller and you can now cool and temper in the same machine. It seems simple enough, and yet equipment has been offered which departs from these essential principles with unfortunate results. Some equipment suppliers don’t bother with the heat and circulation or fan and  simply provide  a spray bar to rain down a “fine mist” of LN 2 droplets on delicate and expensive steel and carbide tooling having stress concentrations at their sharp edges.  It’s not clear  how  “fine”  this  mist must be to avoid rapid cooling of the surface  of  the  edges  of  such  tooling  while  the core remains warm . This results in contraction of the  surface with the generation of transient tensile stresses; chipping and cracking may follow.

At least one manufacturer  slowly  floods  an  insulated vessel  containing  the  payload. The theory is that since the LN2 level rises slowly to envelop successively higher levels of tooling, that parts above the liquid will have time to cool clown before the e liquid actually hits so the e shock won’t be too great. Unfortunately, this scenario ignores  stubborn physical realities. The temperature gradient above a quiescent pool of LN2 is very steep and the rate of heat transfer from a solid to LN2 is orders of magnitude greater than that between the same solid and gaseous LN2 at the same temperature as the liquid. This modified “dip” technique is risky business and should be avoided. In an attempt to reduce LN2 consumption, some equipment suppliers have resorted to hybrid systems that employ mechanical refrigeration with an LN 2 assist. In principle, this is a reasonable approach; its implementation, however, should be carefully scrutinized. The mechanical refrigerator component must provide a sufficient BTU removal rate to transfer out latent heat rapidly enough to get the temperature down in the time required by the programmed Controller. Larger payloads will require a greater BTU removal rate than a small payload running under control of the same program.  Simply monitoring the chamber gas temperature may not ensure that the payload is getting cold. An underpowered mechanical refrigerator may have enough “oats” to cool a thermocouple, especially if it is located near the expansion coil, but not do much to a large mass of steel. Under this condition, when the LN2 “assist” kicks in to take the load down the rest of the way, you risk thermal shock.  The controller thinks the payload   is colder than it really is and unleashes enough LN2 to rapidly achieve a larger temperature drop than intended for a given time interval. Once again, thermal shock rears its ugly head.

From a purely practical point of view, hybrid systems may combine the worst of both worlds. You need a supply of LN2 and you also need to confront the maintenance of refrigeration compressors that are required to make repetitive deep temperature descents.  These compressors are happier if they are required to merely maintain a low temperature in an insulated chamber to which relatively small masses are occasionally added; a good example would be a biological tissue storage refrigerator. Cryoprocessor service is very severe and requires heavy duty equipment if this approach is to yield reliable service.

Notice that the term cryogenic processing includes the word “cryogenic.” The principles of cryogenic engineering have been integrated into well-developed industrial practices and devices. Therefore, it is surprising that most manufacturers of cryogenic processing equipment have employed little use of these principles. The typical machine, even those designed to avoid thermal shock, is little more than a modified tempering oven, with ceramic insulation replaced by polyurethane foam. The engineering objective in designing an efficient cryoprocessor chamber is to minimize heat gain from the ambient surroundings.  Such heat gains must be offset by LN2 consumption when compared to electricity or natural gas used for heating

The sign of an economical cryogenic system requires techniques not normally drawn upon in heating applications. Merely injecting foam insulation into the hollowed-out walls of a tempering oven won’t do the trick. Any solid insulation is subject to failure by means of thermal cycling fatigue. when the inside of the chamber gets cold, the inner layer of insulation starts to contract while the outer layer of insulation remains near room temperature. Differential contraction of the insulating mass leads to internal stresses. In machines that also temper, the stress distribution gets reversed. Repeat this cycling many times and the insulation will fatigue and crack and may crumble. Deteriorating insulation leads to increased LN2 consumption and also to thermal gradients within the processor. Polyurethane insulation is rated for a maximum operating temperature of +225 °F. and yet at least one equipment manufacturer uses polyurethane up against the inner chamber wall which gets to + 300 °F and higher. Of course, this slow deterioration occurs within a hidden space and so is not evident to the casual observer; only his LN2 distributor knows for sure! 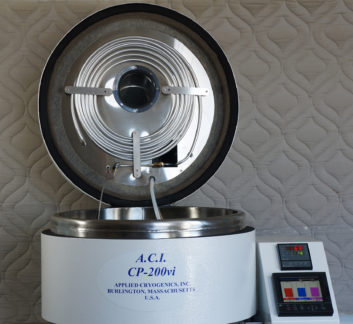 The typical tempering oven and the typical cryoprocessor is constructed of thick steel members welded together to ensure structural strength. Consider the heat transport consequences of this approach. The outer walls of the device communicate thermally with the casketed surface against which a door closes. The gasketed surface communicates with the chamber interior.

During a cooling cycle, the outer walls absorb ambient room heat. It is , in effect, a giant heat absorber immersed in an infinite heat source, the atmosphere re. This heat travels through the gasketed surface into the inner ,vales, which act as a radiator. The rate of heat conduction is proportional  to  the cross sectional  area of the members;  the thicker  the steel the more severe is this problem. This is called a “heat bridge” and is a bad thing because you must expend LN2 to offset these gains. Note: the typical cryoprocessor door is also a heat bridge and contributes about as much heat gain as that of the body of the machine . Other heat bridges , of less importance, would be fan shaft penetrations and even LN2 supply pipes.

But wait, there’s more. The same massive steel  members  that contribute  to ambient  heat gain also contain latent heat that must be removed with that of  the payload  to the tune of about  1/4 liter per pound. Unfortunately, there is no “pay” associated with this load; it’s strictly operating overhead.   There  is today a certain sense of  pride expressed  by some in owning a cryoprocessor     built like a tank.  It may inspire a feeling of machismo to own such a device. The operating cost associated with such an indulgence can be quite substantial and,  like deteriorating insulation, is hidden from view

Cryogenics engineers have confronted these problems and provided clever solutions. Principal among these is the concept of vacuum insulation. Instead of relying upon the insulating value of trapped air pockets as in solid insulators, vacuum insulation relies on nothing . That is , you cannot have heat conduction or connection  across  a  vacuum .  The third  possible  transport mechanism, thermal radiation, can be mitigated by the insertion of an electromagnetic radiation reflector, aluminum foil, in the vacuum. Of course. the vacuum must be contained in something. This is, typically, a pair of concentric cylinders of nearly equal diameters, welded together around the perimeter of one set of circular ends with each opposite end capped with its own circular plate displaced slightly in the axial direction so that they don’t touch. Alternate layers of aluminum foil and fiberglass cloth fill the annular space between the cylinders, which is evacuated to about  10 -6 torr. This is essentially an industrial strength thermos bottle and is nearly perfect insulation..

The major mode of heat gain is via solid conduction from the outer cylinder through the junction between inner and outer cylinders and can be mitigated by careful design. Material thickness is intentionally kept to a minimum. The hoop stress resulting from the pressure differential between the evacuated region and the outside  world is accommodated by the cylindrical geometry. The payload weight is supported at the junction between the inner and outer cylinders so that no support members, who would be heat bridges, are required. There is no solid insulation to fatigue or slowly burn up. The non-pay load is at a minimum. Vacuum insulation provides an example of less really being more. Less mass means less wasted LN2,  which means more operating efficiency. Less solid insulation, really no solid insulation, means less heat gain and no degradation of thermal performance, which again means greater operating efficiency.

A numerical example comparing foam insulation to vacuum insulation with regard to heat gain is compelling. Consider a six inch slab of foam and a thin vacuum region containing reflective layers, each maintained with a temperature difference across their respective surfaces of 400 °F. The foam passes 15.3 BTU per hour per square foot while the vacuum passes 0.0080 BTU per hour per square foot. The vacuum is more than a 1900 fold improvement over the foam, is more durable than the foam and takes up considerably less space!

Continual incremental improvements over the years now enable us to offer highly refined, efficient, durable and reliable cryoprocessor embodying all of the positive features described above.