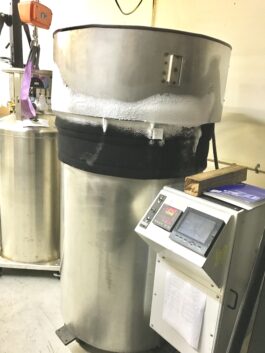 We live in a very narrow temperature range between approximately -40o and 130oF. That is the temperature range in which we lived for thousands of years. Then we discovered fire and found that high temperatures were successful in helping us change materials. Fire helped us soften and harden metals. Fire helped us melt metals so we could shape them by casting. The effects of heat on metals and other materials were visible or easily detectable. A cryogenically hardened hardened metal resists scratching and bending more. An annealed piece could be worked easier. A melted piece was liquid. Fire helped us turn metal ore into metallic form.

The lower temperature limit in the processing of metals stopped at a temperature in the life sustaining zone, and usually at ambient temperature for the day. The Swiss would bury watch parts in the snow to improve their wear resistance, and casting companies (and racers) would let castings “age” outside for long periods of time. They found that the aged castings did not distort so much in machining and in use and did have some better wear resistance. But there were big obstacles to using cold temperatures for treating metals. One was that until the late 1800’s it just wasn’t possible to get a lot of cold. The other was that people couldn’t conceive that a change could be made in a ‘frozen’ piece of metal.

It was the late 1800’s when people started to find ways of liquefying air. At first the amount that they could liquefy was extremely small. By the first decade of the 1900’s companies started to make liquid oxygen and liquid nitrogen in ‘industrial’ quantities. It took a while for them to get past freezing flowers and small animals. After all, what do you do with something you have never had before? Initial results on some metals that were dropped into liquid nitrogen produced negative effects.

Metallurgists were learning more about metals about this time. This was a time when metallurgists started polishing and etching metal samples and looking at them under a microscope. In steels they found that there were different ways the iron atoms related to the carbon atoms and the alloying atoms related to each other depending on the thermal history in both temperature and time of the part. You see, metals are crystalline. The way the atoms relate to each other depends on how hot or cold they have been and how fast the temperature changed. Crystal structure is what gives metals their metallic characteristics. So when someone tells you that a part failed because the metal crystallized you automatically know they do not know what they are talking about.   By the way, metals are not molecular. So when someone tells you DCT affects the molecular structure of the metal you also know that they do not know what they are talking about.

A hard form of steel is called Martensite. Martensite was named after Adolph Martens, a German metallurgist who lived from 1850 to 1914. It has a distinctive structure when magnified. It is produced by heating steel to a high temperature. At that temperature (which is alloy dependent), the steel forms a structure named Austenite. Austenite is named for British metallurgist Sir William Chandler Roberts-Austen. When austenite is cooled quickly from its formation temperature, it forms Martensite. If it is cooled slowly, it remains Austenite. Cool it at some intermediate rate and some martensite forms but some austenite will remain. . It turns out that if you bring the temperature way down, retained austenite will turn into martensite. Also, you can vibrate or cold work or temper (tempering is a mild heating process) or just age retained austenite and it will transform to martensite.

Certain things happen when transforming austenite to martensite. First, martensite is bigger because the atoms are farther away from one another. So the part grows. It doesn’t always grow evenly because metal grains are not all lined up evenly. This means the part can also warp. Also martensite needs to be tempered or it will be brittle. Now here is the kicker. If you have retained austenite (and you will) your part will change size, warp and have brittle areas because vibration, temperature change in use, and you cannot stop the passage of time. So tightly toleranced parts can change size and to some extent shape in use. This can make them unsuitable for use or require them to be designed with looser tolerances than ideal to allow for the change. A good example of this is with ejector pins in plastics molds. They have to have a close fit in order to reduce the possibility of the plastic going between the pin and the pin bore. We’ve found they can grow in use and then start to scrape and gall. Cryogenic Hardening of metal stops this.

Besides transforming retained austenite, Cryogenic temperatures have other effects on crystal structure. It affects the concentration of point defects in the metal. For instance, the number of vacancies in the crystal matrix (areas where an atom should be but is not) are temperature dependent. The higher the temperature, the more vacancies can exist. Cold reduces the number of vacancies. It makes the atom to atom distance more uniform and more ideal. It affects where the alloying elements are in the crystal matrix. All these happen for reasons that are beyond the scope of this article, but are taught in the primary courses in metallurgy.

DCT offers a definite finish for heat treating through the use of more of the temperature range. We call that range cold only because it feels cold to humans, it is outside the temperature range that we are used to. Cryogenic hardening of metal removes residual stresses, stabilizes materials, improves wear resistance, and increases fatigue life.

CTP's own Cryoprocessors
We use cookies on our website to give you the most relevant experience by remembering your preferences and repeat visits. By clicking “Accept All”, you consent to the use of ALL the cookies. However, you may visit "Cookie Settings" to provide a controlled consent.
Cookie SettingsAccept All
Manage consent

This website uses cookies to improve your experience while you navigate through the website. Out of these, the cookies that are categorized as necessary are stored on your browser as they are essential for the working of basic functionalities of the website. We also use third-party cookies that help us analyze and understand how you use this website. These cookies will be stored in your browser only with your consent. You also have the option to opt-out of these cookies. But opting out of some of these cookies may affect your browsing experience.
Necessary Always Enabled
Necessary cookies are absolutely essential for the website to function properly. These cookies ensure basic functionalities and security features of the website, anonymously.
Functional
Functional cookies help to perform certain functionalities like sharing the content of the website on social media platforms, collect feedbacks, and other third-party features.
Performance
Performance cookies are used to understand and analyze the key performance indexes of the website which helps in delivering a better user experience for the visitors.
Analytics
Analytical cookies are used to understand how visitors interact with the website. These cookies help provide information on metrics the number of visitors, bounce rate, traffic source, etc.
Advertisement
Advertisement cookies are used to provide visitors with relevant ads and marketing campaigns. These cookies track visitors across websites and collect information to provide customized ads.
Others
Other uncategorized cookies are those that are being analyzed and have not been classified into a category as yet.
SAVE & ACCEPT

Please complete the form below.